Latvian Higher League or Virslīga is a professional football league and the top tier of association football in Latvia. Organised by the Latvian Football Federation, the Higher League is contested by 10 clubs. The full name of the league is Optibet Virslīga for sponsorship reasons since 2019.

The first all-national championship was organized in 1927. Between 1945 and 1991 the championship of Soviet Latvia was a feature of the country's sporting calendar. With Latvia regaining independence in August 1991, the newly established Latvian Football Federation (Latvijas Futbola Federācija – LFF) decided to reorganise its competitions within the Virslīga from 1992. The same year Latvia became a member of UEFA. After the 2007 season the league increased from eight to ten sides. In 2008 each side played the others four times.
At the end of the season, the lowest placed team are automatically relegated into 1. liga, and the winner of the 1. liga automatically takes their place. The second lowest placed team in Virslīga and the second team of 1. liga play two matches for a place in the Virslīga the following season. The winner of Virslīga, the champion of Latvia, plays in the UEFA Champions League qualifying round. The second and third placed clubs play in the UEFA Europa League qualifying games.
A winter off-season league cup, the Virslīga Winter Cup, was played in January of each year from 2013 to 2017, which was replaced next year by the Virslīga Cup (Latvian: Virslīgas kausa izcīņa).
From 2015 till 2018 there were eight participating clubs but in 2019 took part already nine clubs. Since 2020 season league is expected to increase to ten clubs.

The League has changed sponsors for several times. From 2005 until 2010 it was known as the LMT Virslīga. No sponsorships were established for the 2011 season. Starting from the 2012 season, the league was reorganised in partnership with an NGO as "Latvijas Futbola virslīga", adopting the NGO's name in the 2012 season. From 2013 to 2015, the league was known as the SMScredit.lv Virslīga due to a contract with the online microfinance company SMScredit. In March 2016, it was announced that the Virslīga would be sponsored by SynotTip Sports Bar on a three-year contract. They were succeeded by betting firm "Optibet" on a two-year contract, beginning with the 2019 season. 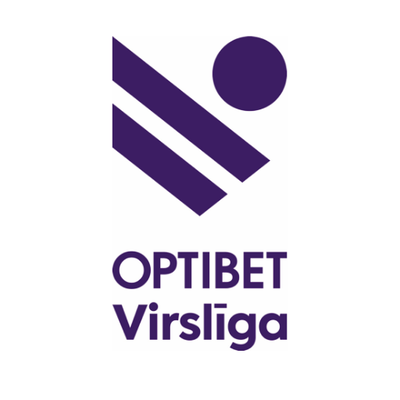